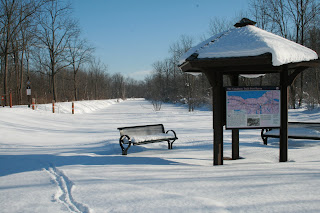 The Centerport Aqueduct was stop three on our 2010 Canal Splash event. It is located a mile west of Weedsport on Route 31. There is a paved parking lot within 200 yards of the structure, so it is very accessible to even those who can't walk long distances.

The Aqueduct Park also sits at the eastern end of the Port Byron to Weedsport section of the Canal Trail. Let me give you a winter time walking hint. The trail from the Aqueduct to Centerport Road, about a mile west, is used by snowmobiles and this is nice if you don't have snowshoes or skis 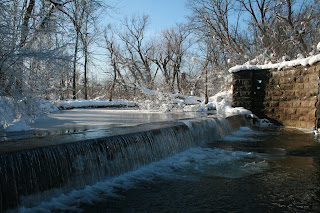 and you want to get out for a walk. The trail from Port Byron to Centerport Road, which is 1.34 miles in length, is not used as a snowmobile route and thus the snow can be better (in my opinion) for snowshoes and skis. This section of trail is near the watered section of canal and is quite nice to walk along. And if you walk down to the end of the watered section, about 3/4 of a mile, you can see a fine example of a stream receiver, a way that streams were taken directly into the canal. Water was taken into the canal by way of feeders, which could be turned on or off by gates (which, if you know what to look for, can be seen at Centerport Road) or by way of stream receivers, which connected the stream directly into the canal. This was not a good way to do it, since during floods, the water could not be turned away. But it was cheaper to build a stream receiver then to build a feeder structure, so frugality won out sometimes. 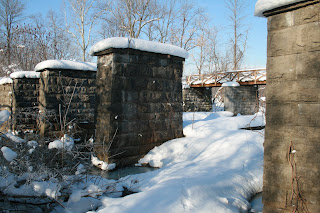 Don't let the cold keep you away. As you can see from the photos, winter can be a spectacular time to visit canal sites.

If you want information on the Aqueduct, go back to the list of tour stops and click on the blue link. Doing this will take you to a fact sheet that you can download and print out.
Posted by Mike Riley